Michael Dell declares ‘on-prem vs. off-prem’ debate over, bets on data and multi-cloud 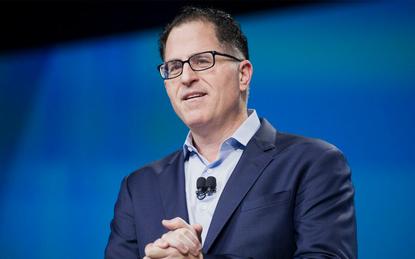 Michael Dell took 68 seconds to emphasise the importance of data to channel partners and customers during the opening keynote of Dell Technologies World, taking centre stage following a three-year in-person hiatus to place market bets on the emergence of a multi-cloud ecosystem.

Addressing more than 5000 attendees in Las Vegas -- spanning partners, distributors, alliance vendors, customers and employees -- Dell declared the “on-prem vs. off-prem” debate over, instead redirecting focus to leveraging data to create competitive advantage at the edge.

At the centre of such change? An attempt by Dell to assume the primary role of industry orchestrator providing customer and partner choice.

“We’re taking the next leap forward with a multi-cloud ecosystem that encompasses the edge in which artificial intelligence [AI] processes and moves data through 5G networks in highly automated environments,” said Dell, speaking as chairman and CEO of Dell Technologies.

“All possibilities hinge on how effectively companies use data and that means data has to compromise by location. The ‘on-prem vs. off-prem’ debate is over, the future is multi-cloud with workloads and data flowing seamlessly across the entire environment.”

According to Dell, 90 per cent of customers already house both on-premises and public cloud environments with 75 per cent using three or more different clouds.

“We’re building an ecosystem to enable true multi-cloud and to deliver the edge which is the next frontier in which data becomes managed at the point of creation,” Dell added. “This is an automated and intelligent synchronous cycle of data connection, protection, analysis and improvement.”

"But so will the attack surface. Ransomware attacks are the number one threat to most organisations and are occurring every 11 seconds with an average cost of $13 million.”

At the forefront of the market opportunity ahead, according to Dell, will be the channel -- specifically more than 200,000 partners housed within the vendor’s network across the world.

“There’s an enormous role for partners and they form an incredible part of our ecosystem,” Dell confirmed. “Over 50 per cent of our orders last year were delivered via the channel and we’re seeing a super active and engaged ecosystem. We have an aggressive roadmap of adding more capabilities, features and functions to build out that opportunity.”

Dell Technologies World has always been an event with an edge -- not so much from a solution standpoint because all vendors thrive on product release after product release, rather its ability to put the cat firmly among the pigeons.

As far as annual conferences go, this has a track record of throwing sizeable market curveballs -- think the acquisition of EMC, the buyout and subsequent spin-off of VMware and cameo roles of Pat Gelsinger and Satya Nadella among other high-profile executives.

A forum which unpacks the inner thought process of one of the world’s most successful entrepreneurs with his bold business decisions regularly having significant industry implications for partners and customers alike.

Yet 2022 has proved different -- a hell-raising announcement was not required. The fact that this event ran in a face-to-face capacity -- one of the first to run at such size and scale from the tier-1 vendors since COVID-19 -- has proved enough to get the pulses racing in the corridors of The Venetian and along Las Vegas Boulevard.

Countless one-on-one meetings, channel sync ups, customer briefings and partner appreciation dinners -- the ecosystem is just happy to be back under one roof, collaborating.

Likewise, with technology investments rising and talk of transformation projects returning to customer conversations, the focus is more on execution rather than persuasion. The opportunity is evident so now is the time to capitalise.

But of course, a genuine appreciation of being out and engaged -- plus litres and litres of customary kool-aid -- was not enough to sustain a 5000-strong audience. And as expected, Dell as a drawcard speaker packed a punch with an opening keynote centred on data and multi-cloud.

“During the past two years, technology has become even more important and even more essential,” he said. “The pandemic put an exclamation point on the importance of digital technology for everybody.

“In terms of creating this ecosystem, we bring numerous advantages given we’re number one across every area of technology from PCs to cloud. We also have the industry’s most strongest and resilient supply chain.”

In acknowledging that customer focus is transitioning from infrastructure to developers, the vendor has also committed to “embracing developers” to support multi-cloud ambitions.

“We’re making all of our solutions API-driven and developer-ready,” he added. “We’re also embracing high levels of automation to ensure our infrastructure fully supports containers and modern application development requirements such as Kubernetes, Tanzu and OpenShift.

“Containerised applications are transforming IT and modern applications -- we are partnering closely with VMware to deploy Tanzu to transform how we build, manage and securely run cloud applications. And with APEX, we’re making everything available as-a-service, focused on outcomes."