How much does AWS, Microsoft and Google Cloud spend on cloud? 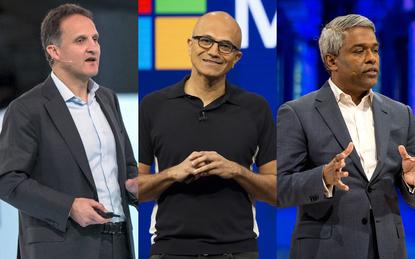 As the old adage goes, you’ve got to spend money to make money. With regard to public cloud success, this certainly feels true.

Meanwhile, cloud vendors like Oracle that weren’t able (or willing) to invest as heavily continue to lag in cloud market share and growth.

Although it may be too strong to suggest that big spending is a causal factor in netting big returns, it’s perhaps telling that AWS spent much more than its cloud peers and saw revenue growth jump 10 per cent over the last year. Causation? Maybe. Correlation? Definitely.

So, how much did the Big 3 cloud vendors spend?

Microsoft’s capex is probably cleanest (it has search spending but a bigger percentage arguably goes to Azure data centres. AWS has huge capex to support its retail business, and Google/Alphabet spends a lot on YouTube and search). But even a small percentage of the hyperscalers’ capex spending for cloud is bonkers big.

Other clouds aren’t included here, in large part because they’re not even roughly comparable in terms of capex spending. Earlier this year Fitzgerald, commenting on Oracle’s capex investments, noted that Oracle’s “annual spend [US$1.85 billion] is about what Amazon spent in a week on capex in the last quarter of 2020.”

Looking at the different clouds’ cumulative investments over time, it’s clear that there’s a long way to go for anyone to catch up with the hyperscalers.

Again, not all of this is directly tied to cloud spending. But even if you subtract spending by the different providers for their other non-cloud businesses, a huge pile of money is going to data centres.

Well, maybe. It’s hard to look at public cloud growth rates and not see correlation, if not causation, between capital expenditure spending and revenue. AWS, with the highest market share, actually grew 10 percentage points faster in the most recent quarter than it had a year ago.

In the cloud, scale matters. Capex helps buy scale. That scale becomes a gift that keeps on giving, as Redmonk analyst Stephen O’Grady wrote years ago: “The economies of scale that larger players can bring to bear on the markets they target are, quite frankly, daunting.

"Their variable costs decrease due to their ability to purchase in larger quantities; their fixed costs are amortised over a higher volume customer base; their relative efficiency can increase as scale drives automation and improved processes; their ability to attract and retain talent increases in proportion to the difficulty of the technical challenges imposed; and so on.”

This is a long way of saying that in the cloud, you don’t get to compete unless you’re willing to spend -- and spend big.