AMD buys its way out of the PC chip crunch

AMD's profits climb 70 per cent, thanks to some smart investments and a crazy demand for GPUs. 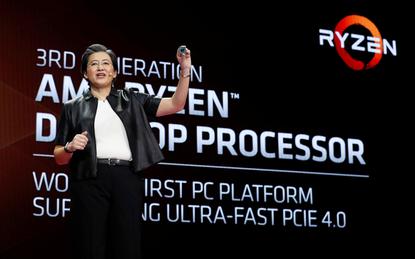 AMD has indicated that it's far better positioned for the fourth quarter of this year than Intel, as executives noted that the company has invested in securing manufacturing capacity during the supply-chain crunch.

Specifically, AMD CEO Dr. Lisa Su said that the company expects sales of its semi-custom products to increase sequentially as the company increases the supply of its console chips to address the strong demand for game consoles made by Microsoft and Sony.

Tellingly, AMD said it expects fourth-quarter revenue to increase 39 percent over a year ago. Rival Intel predicted that revenue would be flat heading into its own fourth quarter.

AMD said that sales of its Ryzen 5000 processors increased by a double-digit percentage from the second to the third quarter, and that the company believed it had gained revenue share for the sixth straight quarter. Essentially, AMD assigned a value to the total PC market, and estimated that more revenue from that market is flowing into its coffers.

Su also said later in the call that AMD was able to increase some of the supply for graphics, and that's one of the reasons that we saw the sequential growth that we saw.

Even though AMD's financial outlook is at odds with its chief rival, the same trends are affecting both companies. Revenue in AMD's Computing and Graphics segment grew 44 per cent year-over-year, driven by a richer mix of Ryzen processor sales -- AMD sold both its Ryzen processors and Radeon GPUs for a higher average selling price than in the past, meaning that consumers were willing to pay more for hard-to-get computer parts. Overall client processor shipments decreased, an AMD representative said.

Last week, Intel reported that PC makers may focus on high-end products, spending money on Intel's fastest processors to maximise their profit margins. AMD's Su noted the same trends, where the PC market may be flattish as it goes from 2021 to 2022, though with higher than expected PC demand.

The problem isn't with the supply of AMD's chips, but with what Su referred to as matched sets -- where PC makers may have enough processors to build 10 million laptops, but only eight million of another component, such as touchpads or display ICs. A shortage of any component can prevent that PC from being built.

All AMD can do is sell what components it can, though it seems like the company will continue trying to push high-end parts as well: But even within that environment, you know, we think there are opportunities for us to continue to grow, Su said.

"Our console business… I mentioned earlier that it'd be up in the fourth quarter and we would expect it to be up in 2022," Su said.

"Just given the strength of the demand environment there. And on the PC side, you know, the comments I'll make on the PC side are that end user demand appears to be strong so there's a good amount of refresh going on, whether you're talking about consumer or high-end consumer or commercial or gaming."

For the fourth quarter of 2021, AMD expects revenue to be approximately $4.5 billion, plus or minus $100 million, an increase of approximately 39 per cent year-over-year.