The Nongsa One site is expected to complete by end of 2023. 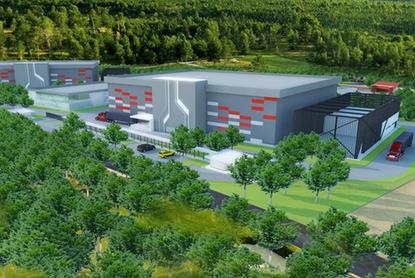 An artist's impression of the new facility.

Upon announcing the establishment of the company earlier this year, it was flagged that the proposed Nongsa Digital Park facility would be its first project to get underway.

Data Center First has a handful of other proposed sites across the region in the works, all of them still in the planning stages.

However, the company’s first data centre site to begin construction, Indonesia’s Nongsa One, is to be designed and constructed to Uptime Tier III standards and is expected to complete by end of 2023.

It is hoped that the US$40 million (S$53.9 million) Phase 1 investment in the Nongsa One DC campus from Data Center First will help to strengthen the broader connectivity and ‘digital bridge’ between Singapore and Nongsa.

It is claimed that Data Center First is the first international data centre operator to establish a presence in Batam, which lies to the south of Singapore and is part of the Riau Islands, a province of Indonesia.

The Nongsa One facility sits on 276,600 square feet of land located in the Special Economic Zone of the Nongsa Digital Park, Batam.

“We welcome the project launch of Nongsa One by Data Center First,” said Gan Kim Yong, Singapore's Minister for Trade and Industry. “Nongsa One will bolster Nongsa's status as a growing hub for tech and IT services, as well as data centres.

“Data Center First's investment highlights the potential of a nearshoring model for Singapore-based data centre operators to expand their capacity and capture the rapidly growing demand for data centre services in Southeast Asia.

“Singapore looks forward to continuing our close cooperation with Indonesia to support the development of the data centre industry in Nongsa,” he added.

According to Bapak Airlangga Hartarto, Indonesia's Coordinating Minister for Economic Affairs, it is expected that the project could help to stimulate the local economy by producing a large multiplier effect, accelerating digital transformation in Indonesia.

"Nongsa One has arrived in Nongsa Digital Park and we are delighted to be the new crossroad for this bold vision of a digital future for Singapore and Indonesia,” said Ka Vin Wong, Data Center First CEO. “This is made possible by our growing customer community who are providing independent services at this new business crossroad.

“We continue to receive expression of interest from telecom service providers, cloud infrastructure providers and e-commerce service providers. I am thrilled for the market to get to know us and be part of our growing community,” he added.

Indonesia is becoming a popular place for the construction of new data centre infrastructure or the purchase of existing sites, especially by Singapore-based players.

Toward the beginning of the year, in February, Microsoft unveiled plans to launch a first data centre region in Indonesia, going head-to-head with Google Cloud and Amazon Web Services (AWS) in a landmark move designed to deliver cloud services locally, aligned to in-country data security and privacy laws.