Microsoft Mesh: Reasons to be sceptical about this new VR platform

Redmond is taking another swing at revitalising VR 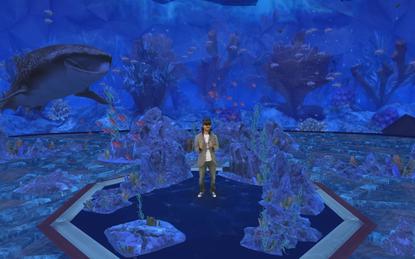 I am very sceptical about Microsoft Mesh, the vendor's new virtual-reality platform, and you should be, too. Microsoft's last attempt at virtual reality, the HoloLens headset, was introduced with a flourish before largely melting away.

The signs so far for Mesh suggest a similarly concerning pattern. Beyond that, we have to ask, do meeting participants event want to mingle in virtual spaces?

Microsoft Mesh was announced at the company’s Ignite conference — an event taking place via Microsoft Teams and YouTube because of the pandemic. Microsoft technical fellow Alex Kipman, the person most closely tied to Microsoft’s HoloLens efforts, announced that the entire Ignite conference is being hosted on Mesh. If you’d like, you can view it in virtual reality. There’s even a Mesh videoconferencing app in preview.

Microsoft hopes Mesh will be seen less as a virtual reality platform and more as a virtual meeting platform, an extension of Microsoft Teams that would replace a physical conference room. According to Microsoft, Mesh allowed Kipman to appear as a fully realised "holoportation" of himself, presenting from within a virtual aquarium with coral and even a shark.

Eventually Mesh will evolve from projecting ourselves as avatars in virtual space to holoporting in as photorealistic self-representations. Microsoft Research began talking about holoporting in 2016, as part of a demonstration video.

Does any of this sound familiar? If you remember anything about HoloLens, it should.

It’s been more than six years since Microsoft first showed off the HoloLens at its headquarters in 2015, bridging play—a virtual Minecraft world—with the practical: manipulating virtual models, as well as receiving instructions to manipulate real objects. The HoloLens demo was filled with hope and magic, ushering in a new way of engaging with the world.

That magic wore off quickly. Despite a few more consumer-focused hands-on experiences and opportunities to try HoloLens at Microsoft Stores, by 2016 the technology quietly began moving away from Minecraft and Mars exploration to enterprise applications.

That transition was essentially made official in 2019, when HoloLens 2 debuted with a strong business bent. When we reviewed the strengths and weaknesses of HoloLens the same year, it was clear that while the technology generated its ‘wow factor’ through flashy consumer experiences, Microsoft never sold HoloLens as anything but a $3,000 development tool.

You saw that same sort of weird disconnect on display Tuesday. Microsoft again spoke of practical applications, such as collaborating on shared 3D models in VR space. But the demos showed off consumer-oriented experiences, such as people moving around a virtual fish tank, and playing a Mesh-powered Pokemon Go game.

Where is the hardware?

HoloLens started a new category but failed to inspire other vendors to jump on the bandwagon. You might recall the 2017 run-up to Windows Mixed Reality: the small herd of headsets from Dell, HP, and other PC vendors that originally lacked Steam support and were frustrating to use. You can find a few leftovers on Amazon, but how often have we heard the term “mixed reality” in the PC industry recently?

Microsoft has said it sees mixed reality as more than just the HoloLens. We’ve seen standalone VR platforms emerge from Qualcomm, and finished devices from Oculus and others. Microsoft also includes the PC and the smartphone among the hardware that could use Microsoft Mesh. But if you’re going to look at Microsoft’s track record in mobile augmented reality, you’re obliged to note that Microsoft tried, and failed, to make its mobile AR game, Minecraft Earth, a viable business.

Will Mesh fatigue be a thing?

However Mesh relates to Microsoft's earlier attempts at virtual reality, the company has tried to up its game. In 2017, Microsoft bought AltspaceVR, a mixed-reality platform that uses avatars as means to socialise virtually. It’s not surprising, then, that Microsoft sees the evolution of avatars to photorealistic interaction as the means by which future meetings may be held.

By the way, how exactly are we going to be scanning ourselves into virtual reality to enable “holoportation?”

Assuming that not everyone is going to have access to VR or mixed-reality hardware, the future of business meetings for phone and PC users will be--what, some first-person, Skyrim-like view where people swivel and pivot their virtual chairs, while others, equipped with a HoloLens, wander about the room? Maybe it’s time for the Kinect—yet another failed consumer device that was possibly ahead of its time—to make a comeback.

It’s possible that the unconscious interaction with avatars and “holoporting” colleagues and friends will alleviate Zoom fatigue, the catch-all term for the exhaustion some feel after a day’s worth of videoconferencing. It’s equally possible that you’ll end up with a killer headache after wearing a VR headset for hours on end.

One counterargument to all this is the mythical “Microsoft 3.0” rule, where Microsoft, after iterating a number of times, finally gets it right. To be fair, when Microsoft Teams entered the market, we were somewhat sceptical.

Microsoft has sent entire phalanxes of developers to support the product, however, adding feature after feature. If Mesh receives the same treatment, its chances should improve significantly. In other words, Microsoft will need more than just a flashy demo to back it up.