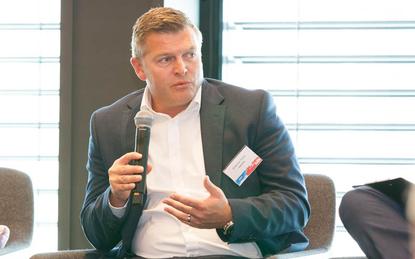 As BlackBerry’s new APAC channel partner and alliances sales director, Pyper takes on the role that Joe McPhillips, former BlackBerry director of channel sales for APAC, held until November last year, when he left the company.

McPhillips came into the BlackBerry fold after several months with security firm Cylance as APAC channels director. Not long after he joined Cylance, BlackBerry announced its US$1.4 billion acquisition of the security vendor, the deal closing in February the following year.

In his new role, Pyper has been tasked with leading BlackBerry’s regional channel team and working to promote the company’s recently revamped partner program.

In October last year, the vendor consolidated the two partner programs it had been operating in tandem on the back of its 2019 acquisition of Cylance.

“We welcome Graeme Pyper to BlackBerry as director, APAC channel sales,” BlackBerry managing director for Australia and New Zealand David Nicol said. “Pyper will be leading a team of top talent in the region in support of our recently launched unified partner program. We are excited for the year ahead."

Pyper spent more than two years at Thales before making the leap to BlackBerry. He came to Thales by way of Gemalto, which the French aerospace multinational struck a deal to acquire for €4.3 billion in 2017. That acquisition reached completion by early 2019.

By the time Gemalto, which itself acquired data protection provider SafeNet for US$890 million in 2014, was finally rolled into Thales, Pyper had spent several years with the digital security provider in various roles, including A/NZ regional director.

“Working with so many talented partners helping drive business and so many of whom I can call friends along with a Thales team bringing innovative solutions to market has been an absolute pleasure,” he added.