Why the new Surface Duo could be the perfect workstation 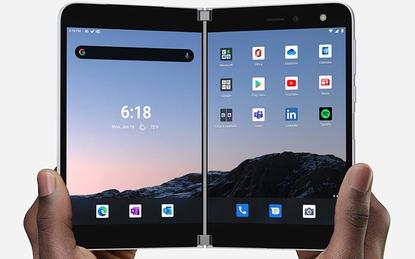 Editor's note: Microsoft is a client of the author.

Last week, I had an interesting chat with Israel Sumano, senior director of infrastruture services at Southland Industries. He has around 450 engineers using Workspot's cloud desktop solution running on Microsoft Azure.

Most of these people are using old desktops, but he has been using an S20 Ultra to host his desktop. That's why I wanted to talk to him.

I know a bit about Workstation users: they demand – and typically get – the hardware they want, and Workstations tend to be several times more expensive than PCs. So the idea of putting a firm’s engineering staff onto what amounts to a thin-client solution shouldn’t work.

But the plan is to put these engineers on Microsoft’s new Duo, which is the first Smartphone in some time (other than a BlackBerry) with a serious business focus.

I think this showcases just how far these solutions have come; this is the third customer I know of that has looked at all the desktop options and concluded Workspot is the best. That’s not a definitive study, by any stretch, but it indeed suggests the firm has something different and compelling.

Workspot, Citrix and others in the virtual desktop space arose from the original concept created by Sun and Oracle as a counter to Windows. The idea was to go back to a terminal-like hardware design because maintaining a few large servers should be cheaper and less aggravating than maintaining thousands of desktops.

That effort showcases how little either Sun or Oracle understood about the desktop. It existed because IT was not unresponsive during the mainframe period but because the mainframe desktop solutions didn't allow a user the flexibility needed to do the job and were generally batch-oriented.

That forced them to do their jobs sequentially. Unix servers could multi-task, but they weren’t designed to provide the level of multi-tasking a large number of users demanded.

In addition, the networks were slow and latency high – and the solutions didn’t run  Windows or Mac OS, the two dominant desktop operating systems at the time.

But they did do cool stuff like keep fan noise down and retain state so you could log in from any machine from any place and be right where you left off. And while the clients were indeed appliance-like and never broke, those advantages weren’t enough to get people past fact they were horrible to use.

The result: Thin Clients have historically been used only for data entry or for call centre duty, both of which require little performance and where latency isn’t as big a problem.

The folks at Southland Industries are the exact opposite of call centre employees. They demand high performance and have no tolerance for latency. But they are also costly to support because they chase performance and can often be on an annual replacement cycle for their much more expensive hardware. And that is why Workspot’s cloud desktop suddenly makes sense.

I’m currently using a Surface Duo myself, so when Southland Industries said it was  planning to buy its engineers Surface Duo phones and use them, I took an interest. You see, over the years, smartphones have become more and more capable, and they are arguably quite a bit more powerful than the desktop thin-client hardware we had in the 1990s, when thin clients were introduced.

You can now hook monitors, keyboards and mice to your phone, giving it the same interfaces as your PC.  The graphics and processor performance has increased to a point where PCs with smartphone internals (called Always Connected PCs) work surprisingly well.

Southland was already using tablets (Samsung Note 10+ tablets) or smartphones for some cloud desktop users and the guy implementing the solution – Sumano – was one of those users. (You’d think he could pick anything he wanted given his position; he picked a Samsung S20.)

So why not go to a smartphone designed for business – the Surface Duo. Now that the phone isn’t out yet, so Southland hasn’t deployed its solution yet. But assuming it works as well as the Samsung phone and tablet do, this could be the ideal cloud workstation solution. The dual displays make it useful on the road, and connecting it to monitors, keyboard, and mouse make it useful in the office.

The engineers can still specify the performance they need in the Azure cloud when they need it, and the result is an appliance-like a desktop with true workstation-class performance.

Wrapping up: The Perfect blend of mainframe simplicity with PC/Workstation performance

Assuming this works, a Microsoft Surface Duo tied to an Azure backend running a cloud desktop solution like Workspot could represent the start of a perfect storm – a mobile client tied to a full cloud service where the desktop virtually resides, secure, maintaining state, and with all of the performance a user would need.

At the same time, the smartphone can be used as a phone and for low-performance tasks such as email, social media, and short-form digital communication (texting, messaging, etc.).

Microsoft continues to advance its efforts to integrate the smartphone with the PC (YourPhone), (Continuum), suggesting that at some point, moving between the experiences will become seamless. Then things should get interesting.

Maybe the new killer smartphone feature is that it becomes your doorway to a level of performance on demand We may finally get that blend of mainframe security and reliability coupled with PC flexibility and personalisation we’ve always wanted. We’ll see...