As the Covid-19 outbreak continues to disrupt business, employees are turning to mobile business apps to ensure productivity remains high 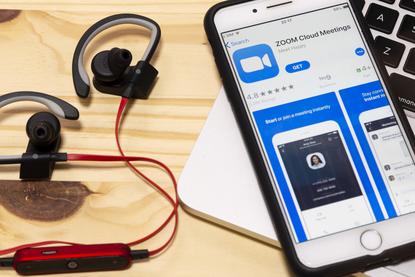 With a growing portion of the global population now living under some kind of government lockdown, many organisations have had to shift business processes – and their employees are having to embrace a work-from-home culture on a scale never before attempted.

Not surprisingly, the demand for video conferencing apps has surged in recent weeks, with enterprise-focused mobile app downloads reaching 62 million during the week March 14-21 – the highest number ever seen.

According to a report by App Annie, that figure was up 45 per cent from the week before and up 90 per cent from the pre-Covid-19 weekly download average. Business application downloads represent the highest growth in any category in both the iOS and Google Play stores.

Microsoft Teams and Google Hangouts Meet both jumped in the rankings, with Zoom Cloud Meetings the undisputed winner; it saw large numbers of downloads in the US, UK and across Europe.

According to App Annie, during the record-breaking week Zoom was downloaded 14 times more than its 2019 Q4 weekly average in the U.S.; 20 times more in the UK; 22 times more in France; and a staggering 55 times more in Italy. The higher numbers are in areas that began lockdowns earlier.

During the same period, Hangouts Meet saw 30 times the weekly level of downloads compared to the last quarter of 2019 in the U.S., while Teams saw an 11-fold increase.

“As people face uncertain timelines for the length of social isolation, video conferencing apps have the potential to vastly influence our daily habits — breaking down geological barriers and fostering the ability to work and socialise relatively seamlessly,” said App Annie’s Lexi Sydow in the blog post detailing the app download numbers.

With President Trump this week announcing that federal coronavirus guidelines will remain in place until at least April 30, the dramatic uptake in video conferencing software use is set to continue.

Tom Eagle, senior research director at Gartner, believes that the COVID-19 crisis will be a “catalyst for transformative work cultures and practices that will be significantly characterised by remote work,” noting that video conferencing will become an indispensable tool for workforce collaboration and communication.

For the last several years, Gartner has forecast that, within the unified communications market, the cloud video conferencing market – which includes platforms such as Cisco Webex, Zoom and Microsoft Teams – will only be outpaced in terms of growth by cloud-based telephony.

“This is a direct result of today’s digital workplace and the changing nature of work – as well as the current COVID-19 crisis -- continuing to drive demand for video conferencing at an accelerated pace,” Eagle said.

Even before the pandemic arrived, research showed the demand for collaboration software and video conferencing tools was already on the rise. According to Gartner’s workforce consumer survey, the average amount of time employees spend in meetings each week has reached 11.7 hours, with nine per cent of respondents spending more than 20 hours of their working week in meetings.

“With the combination of non-routine workforce growth and this workplace meeting profile, corporate real estate and IT planner decisions are often animated toward providing more convenient access to collaboration technologies such as video conferencing,” Eagle said.

“They do this not just at the desktop, but in shared spaces such as huddle rooms; access must also be provided for mobile and at-home workers. An agile workforce needs all of these options for enhanced productivity.”