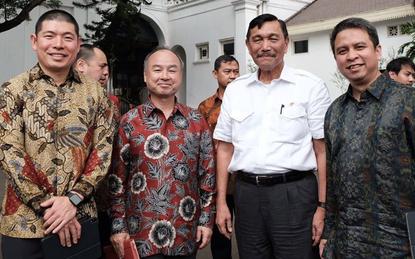 Grab has unveiled plans to invest US$2 billion into Indonesia during the next five years through capital invested by Japanese conglomerate SoftBank.

The aim is to help “accelerate” the development of the country's digital infrastructure, through the creation of a next-generation transportation network for cities, alongside overhauling how critical services, such as healthcare, are delivered.

Terms of the deal will see SoftBank and Grab invest to create a "next-generation transport network" for Indonesia based around an electric vehicle (EV) ecosystem that will drive cities toward a "greener and cleaner" transportation grid.

Both companies will also develop geo-mapping solutions, in order to drive the country's development and adoption of future technologies.

“Indonesia's technology sector has huge potential,” said Masayoshi Son, chairman and CEO of SoftBank. “I’m very happy to be investing US$2 billion into the future of Indonesia through Grab.”

Grab also announced plans for a second headquarters in Indonesia, housing an R&D centre in Jakarta while acting as the “dual headquarters” for the GrabFood business.

“With our presence in 224 cities, Indonesia is our largest market and we are committed to long-term sustainable development of the country,” added Anthony Tan, CEO of Grab. “We are delighted to facilitate this SoftBank investment, as we believe by investing in digitising critical services and infrastructure, we hope to accelerate Indonesia's ambition to become the largest digital economy in the region and improve the livelihoods of millions in the country.”

The application provider will also launch affordable e-healthcare services in Indonesia, within the next three months, aiming to significantly increase access to doctors and medical services "for all Indonesians".

“Grab is an Indonesia-focused company,” said Ridzki Kramadibrata, president of Grab Indonesia. “Having our second headquarters in Jakarta will allow us to better serve the needs of all Indonesians and those from emerging economies in the region.

“As a technology decacorn, Grab very well understands the needs and challenges we have here. We are also well positioned to support more high tech industries and infrastructure companies originating from Indonesia.”

Since 2017, Grab has invested over US$1 billion into Indonesia through its Grab 4 Indonesia 2020 master plan, and its commitment to invest into Indonesian startups.

Going forward, Grab aims to double the number of micro-entrepreneurs in the country in five years, up from the five million created so far, through this additional commitment to Indonesia.

The initiatives were announced after a with Indonesia's president Joko Widodo at the Merdeka Palace in Jakarta.

“Supported by the growing economy, Indonesia has a good investment climate where we are working together to boost the ease of investment in Indonesia,” added Luhut Binsar Panjaitan, coordinating minister for Maritime Affairs in Indonesia. “This investment is evidence that Indonesia has been on the radar of investors, especially in the technology sector.

“We look forward to working with Grab, the fifth unicorn in Indonesia, and SoftBank to empower SMEs, accelerate tourism, and improving health services.”

Headquartered in Tokyo, SoftBank specialises in the provision of mobile communications services, the sale of mobile devices and the delivery of fixed-line telecommunications and ISP services.