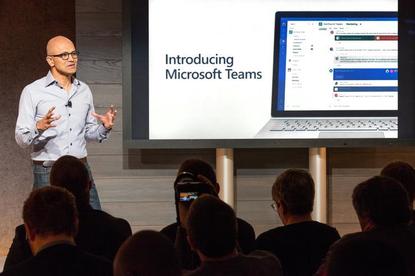 Microsoft’s Teams collaboration app is now used by 13 million individuals on a daily basis, according to data released by the company Thursday, surpassing rival Slack for the first time.

Microsoft introduced Teams in 2017 as a competitor to Slack, which had attracted significant interest as an alternative to email for internal communications following its launch in 2014.

Unlike Slack, which is a standalone application, Microsoft Teams is available at no additional cost for Office 365 customers, of which there are 180 million monthly active users globally.

Microsoft - which reportedly considered a multi-billion-dollar acquisition bid for Slack before developing its own tool - has thrown significant resources behind Teams and has quickly built out new features to cater to a wide range of uses. It is now the company’s main app for enterprise collaboration and communication, replacing Skype for Business Online.

Teams has seen swift growth largely due to the reach of Office 365 and Microsoft’s popularity in business.

The company announced earlier this year that it is now in use by 500,000 organisations. Microsoft, however, had declined to reveal daily or weekly active user information in the past - metrics that give a better indication of how an application is used regularly within an organisation.

Microsoft said the upswing highlights how companies and their employees are adapting to work that centres on team collaboration and channel-based communications.

“What these data points tell us is that people have really moved their work into this open platform for real-time communication and collaboration,” said Kady Dundas, director of product marketing for Teams.

Analysts said companies comparing Slack and Teams should be wary of reading too much into the customer adoption figures, however.

“It’s good to see Microsoft start sharing their adoption numbers – and these are good numbers,” said Wayne Kurtzman, a research director at IDC.

“But these numbers, like all self-reported numbers should be taken cautiously. In this case, are both companies measuring the data the same way? This is always a concern, as it is in looking at social media platforms that use similar metrics.”

Furthermore, despite the success of both Teams and Slack - which recently completed its stock market listing - demand for team collaboration applications is still at an early stage; the potential for growth has attracted a range of vendors including Google, Facebook and Cisco.

As a result, it’s unlikely there’ll  be a winner-takes-all market leader; in many cases businesses will use both Slack and Teams for different employees.

“Even adding Microsoft and Slack’s team collaboration user numbers together, it indicates most companies are still not using collaboration software yet,” Kurtzman noted. He added that IDC expects the team collaboration app market to continue to expand at a compound annual growth rate of more than 20% over the next five years.

“The important takeaway is that executives need to be seriously thinking about collaboration applications that meet the needs of how their enterprise works today, and the future of their work.”

Microsoft also unveiled a range of new features for Teams at Inspire on Thursday, continuing its efforts to attract front-line or first-line workers to the platform.

Workers can now clock in and out of shifts via the Teams mobile app, while managers can “geo-fence” a location to make sure staff are where they should be when clocking in. Managers can also now message all staff with a specific role - such as all cashiers in a store or nurses at a hospital - at once using an @mention relating to the job role.

Other updates include priority notifications that send an alert every two minutes until a response is received, as well as read receipts for messages.

New Announcement messages in Teams chat offer a way to highlight important information such as a new member joining the team, while a channel cross-posting feature lets users quickly post a single message to multiple channels at once.