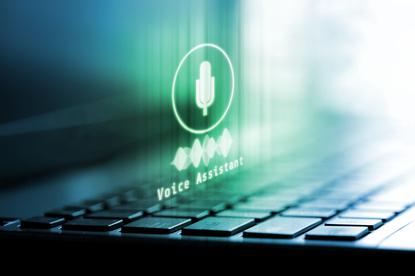 As the likes of Amazon Alexa and Apple’s Siri have gained popularity in our personal lives, the healthcare industry has been at the forefront in adopting voice-driven AI assistants in the workplace.

And for good reason: exponents of the technology claim it can boost productivity and help avoid physician burnout.

Speech-to-text applications are not new to medical staff, who have used transcription software to digitise voice notes recorded on a dictaphone for some time now. However, advances in AI have enabled the creation of virtual assistants that can understand context and intent better.

Voice assistants are now available that can input patient notes directly into electronic health record (EHR) systems automatically when dictated by a physician, potentially saving a significant amount of time and effort.

“Physicians spend on average about two hours on screen time for every hour that they are seeing patients,” said Harjinder Sandhu, CEO of Saykara, a Seattle-based startup that aims to free doctors from some of their burdensome data-entry requirements.

“They are either doing this while they are seeing patients - typing away at their computer - or else they are spending hours in the evenings trying to document that care.”

Saykara launched in 2017 and last year received $5 million in funding for its AI assistant, Kara. “We started thinking about how we can create an experience where the physician is not tied to that screen, where they can just interact with the patients,” said Sandhu.

Sandhu claims that, following a recent product update, Kara is the first “ambient” AI assistant, meaning it doesn’t need to be invoked by the physician using a command word. Instead, the AI assistant listens for the physician describing a patient’s symptoms back to them. This makes the technology less intrusive and facilitates more natural conversation with a patient, he said.

This approach has yielded additional benefits, according to Sandhu. “It actually improves the doctor-patient relationship,” he said. “A lot of times what happens is the patient says something and the doctor interprets in their head what might be going on.

"And so now the doctors using our system are saying things out loud that otherwise they would have just said in their heads or just typed up without sharing with the patient. The patients are now hearing what the doctor is thinking throughout this whole process."

Feedback from patients - who give their consent for their physician to use the AI assistant - has been positive too, according to Sandhu.

“We hear anecdotally that patients love it when their doctors are now using this, because there is much more of this ‘out-loud’ back and forth between the doctor and the patient, versus what would happen otherwise," Sandhu added.

"And a lot of the doctors tell us that they are making fewer mistakes, because they are saying things out loud and confirming with the patient that they heard it right because they know that the system is now listening.”

Since its launch, Kara been used by 20 healthcare organisations in the U.S., and the company sees potential to attract more of the 850,000 physicians currently employed across the country.

Users of the AI assistant have seen a 70 per cent reduction in the time spent on documentation outside of office hours, said Sandhu.

Saykara is one of a range of software vendors with voice assistants that are targeted specifically at supporting physicians. This includes Suki (which announced $20 million in funding last year), Notable (which attracted $13.5 million in investments last year), Nuance (whose Dragon Medical One is one of a variety of speech applications), and a range of others.

The aim for AI assistants such as these is to enable physicians to focus completely on interactions with a patient. “This way the physician does not need to toggle back and forth between the data entry screen and the patient," said Anurag Gupta, a VP analyst at Gartner. “Screen time spent entering data in the EHR is time not spent with the patient.”

The ability to manage workloads is an important topic for physicians, as over half of U.S. doctors report symptoms of burnout.

In addition to the wellbeing of the physicians themselves, burnout has repercussions for patient outcomes and is estimated to cost hospitals around the country billions of dollars, according to a recent report published in the Annals of Internal Medicine.

The increased pressure is partly attributed to the introduction of EHR systems that require physicians to input data following their interactions with patients.

“If left unchecked, physician burnout can adversely impact patient care, lower productivity and drive higher costs for healthcare enterprises,” said Gupta. “There is a strong correlation between adoption of EHRs and physician burnout.”

Adoption of AI assistants by physicians is at an early stage, and while there is plenty of promise, Gupta said there are some challenges in gaining widespread adoption. Although speech recognition technology has improved considerably in recent years, building trust in accuracy is a challenge.

“Even a 0.01 per cent error rate can wreak havoc on the patient’s life if it becomes a medical error,” said Gupta. “The ability to understand what the user is saying in an accurate fashion without having the user needing to repeat things is critical.”

As voice assistants mature, additional features will provide greater utility. “Most of the current voice assistants are only ‘entering/inputting’ the data in the EHR,” said Gupta. “To be truly transformational, the voice assistants should become the clinical decision support at the point of care by also supporting the physician by ‘retrieving/fetching’ the most relevant information.”

For Sandhu, the aim is for Saykara to offer up relevant contextual information to physicians in the future.

“We are working on ways to not just be pulling out information for documentation, but giving information back to the physician,” said Sandhu. If a physician is talking to a patient about a shoulder laceration, for instance, the system can pull up related information, he explained.

“Or the system could present additional options and suggestions for the physician that allows them to provide better care to the patient - guidelines and other things that they might otherwise overlook.”

However, he said that the technology is already able to deliver on key demands from physicians. “There has been talk about this type of technology now for a lot of years,” he said. “Most of that has been hype and not reality, and so now when we present these sorts of solutions to physicians, they are very, very eager to adopt it.

“Any solution that can relieve them of the documentation burden, they want it yesterday and not next week."