Will Surface owners want to type on glass? 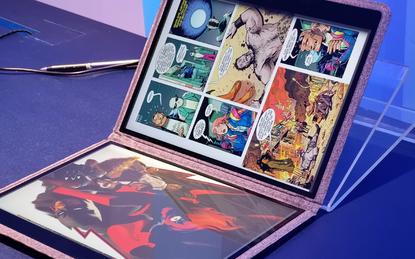 Microsoft reportedly has shown off a dual-screen version of a Surface device, in what sounds like a smaller version of the ”Twin Rivers” concept Intel showed off at Computex in late May.

According to The Verge, Microsoft’s devices group held an all-hands meeting last week, where a “sizzle reel” of the new devices was shown.

The site reported that it’s internally code-named “Centaurus.” It’s not clear whether it’s designed to be a foldable, pocketable tablet, or something a bit larger.

Microsoft has previously experimented with more portable versions of Surface hardware, most notably the 2018 Surface Go.

Microsoft retail employees have previously told PCWorld that the Go hasn’t sold as many units as Microsoft had hoped for, given that the Go was powered by a Pentium processor and ran Windows 10 S, as opposed to the Intel Core/Windows 10 combination that other Surfaces are based upon. Microsoft has priced the Surface Go at $399, though, a marked discount from other Surface devices.

The Surface Go comes bundled with a smaller version of Microsoft’s Type Cover. Microsoft’s Centaurus, however, is expected to follow the recent trend of dual-display devices.

We’ve seen other designs adopt that approach, most recently the Intel “Twin Rivers” concept that the company showed off at Computex.

Notably, Twin Rivers looked remarkably like a Surface, not the least because it was bound in a fuzzy fabric reminiscent of the Alcantara fabric used by Surface devices. Though Intel’s display device was configured like a comic book, the device also allowed one of the screens to act as a soft keyboard.

According to The Verge, “Centaurus” isn’t a given, and is possibly six months away from launch. It’s also unclear whether it would ship a standard version of Windows 10, or the “Lite” version that Microsoft is reportedly developing.

What we’re thinking about: Other key questions remain. An important one is the size: a smaller, pocketable device implies that Centaurus would be designed more for content consumption, while larger Surface Pros and Surface Books have traditionally been used for content creation.

Microsoft’s Surface line also boasts one of the best keyboards in the industry, and it’s unclear whether Microsoft wants to abandon that legacy in favor of typing on glass. Apple tried that with the iPad, then later gave up by announcing dedicated iPad keyboards. Regardless, it sounds like Microsoft has some time to work out the details.