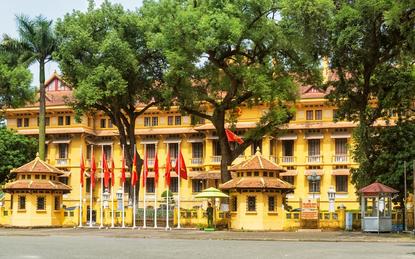 Vietnam is ready for new technological models according to the country’s minister of information and communications, Nguyen Manh Hung.

The country is rapidly becoming an economic powerhouse within Southeast Asia with the number of tech companies expected to double from the current 50,000 to over 100,000 within the next five years.

Furthermore, Vietnam is expected to become a developed nation by 2020 with a trading flow of US$340 billion, with foreign direct investment (FDI) also accounting for approximately 22 per cent of its economy.

The minister highlighted the role his government is playing in fostering technology companies through suitable policies and mechanisms, while referencing the recent national forum as an example of the steps the country is taking to foster a community of technology businesses in Vietnam.

At the event, the minister highlighted the role the technology community is playing in helping Vietnam escape from the medium-income gap and become a developed country.

He further went on to say that all suggestions proposed at the forum would be carefully considered and constitute important feedback to the government in devising a suitable national strategy to help develop Vietnamese tech firms.

The minister also drew attention to much longer term plans for the government in fostering the country’s tech ecosystem including his government’s effort on improving standards for Vietnamese products and initiatives to increase their competitiveness.

However, he emphasised that the government should not play a role in subsidising these firms, but instead assign more challenging tasks to them, giving them the opportunity to mature and develop sustainability.

The “Make in Vietnam” motto was also a major theme of the national forum, with the minister stating that his government is actively pushing for closer cooperation between three specific groups, namely, those in the start-up community.

Specifically, those who create innovative products; start-up technology firms, which exploit current technologies to develop new products or solutions for other companies; and Vietnamese tech giants such as FPT Group, VNG, CMC, or other organisations across sectors like telecommunications, commerce, services and real estate who may want to invest more into developing their tech business.

In addition, the Vietnamese government was actively looking to pilot new models in areas such as fintech and techno-taxi, using the relationship between Grab and other taxi companies as an example. According to Hung, the government was also looking at sandboxing policy, before rolling it out nationwide.

Using the start-up community as an example, Hung alluded to the fact that start-ups consisting of only a few graduates were unable to manufacture a telecommunications device with a value of hundreds of millions of dollars, while some of the mentioned tech giants could.

When discussing new tech models for the country, Hung narrowed in on the fact that people normally resist novel ideas because they conflict with the current ones.

In the case of the telecommunications sector, the government, earlier in 2019, began experimenting by using a telecommunications account to pay for small value goods, via mobile payments, even though this avenue would impact local banks.

Hung also emphasised the importance of investing in training and developing and that for these and future initiatives to be successful there needs to be increased funding in education and upgrading and re-skilling the workforce.

He also wants to see more work being done to attract Vietnamese IT talent working in foreign countries and tech firms to return to Vietnam and help the local enterprises to grow.