300 new specialists are expected to be trained in cyber terrorism 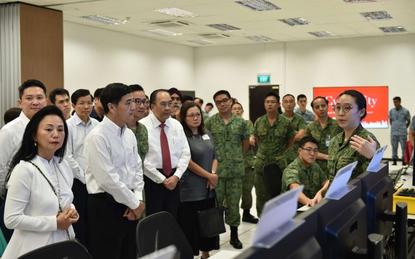 A new cyber defence school has been unveiled by Singapore’s ministry of defence (MINDEF), in addition to two new cyber expert schemes; expected to train 300 specialists in cyber security skills.

Led by the defence cyber organisation, these initiatives aim to support both MINDEF and Singapore Armed Forces (SAF) in their efforts to better safeguard its systems and networks.

The announcement comes on the back of Dr Ng Eng Hen, Singapore’s minister for defence, unveiling cyber/digital defence as the sixth pillar in the country’s total defence framework, alongside military, civil, economic, social, and psychological defence.

“Today, the SAF is using networks and a networked force to fight,” said Heng Chee How, senior minister of state for defence. “So inherent in this approach is the use of high-end technology and digital means.

“This allows us to multiply the effectiveness of our forces, but at the same time, it also opens up us to being attacked by cyber means.

“This is why we have set up these cyber capabilities in order to defend our systems, to ensure that our systems are resilient against these attacks and that we are operationally ready so that we can protect our sovereignty and give peace of mind to Singaporeans."

The 300 new specialists are expected to be trained against the rising threats of cyber terrorism, developing skills in such areas as cyber incident response and vulnerability assessments, in addition to being responsible for operations planning and policy formulation.

The new school is expected to based at Stagmont Camp, where the announcement was made on the sidelines of an advisory council on community relations in defence (ACCORD) visit.

Some the vocations available include the uniformed the command, control, communications and computers expert (C4X) vocation for military personnel, and defence cyber expert (DCX) job specialisation for non-uniformed personnel.

It is expected that the C4X and DCX personnel will work together with cyber NSFs (full-time national servicemen) to defend MINDEF/SAF's systems. The CDS will serve as the centre for cyber defence training and education across MINDEF/SAF.

The new cyber expert military vocation, job specialisation for non-uniformed personnel, and the opening of cyber defence school are part of MINDEF/SAF's efforts to strengthen its cyber security ecosystem.