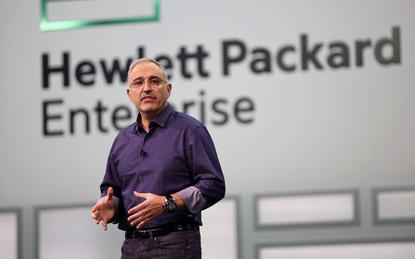 The tech giant’s annual sales have slid since it split from Hewlett-Packard in 2015 as its mainstay server business has struggled with corporate customers increasingly buying non-branded servers that are much cheaper.

In response, HPE is cutting costs as part of its HPE Next initiative announced last year, aiming to drive gross cost savings of US$1.5 billion in the next three years.

The vendor, which competes with rivals such as Dell EMC and Cisco, forecast current-quarter adjusted earnings between 33 cents and 37 cents per share, the mid-point of which came in line with Wall Street estimates.

Revenue from its Hybrid IT division, which houses servers, storage and data centre networking products, rose 4.6 per cent to US$6.44 billion, above analysts' estimates of US$6.30 billion, according to data from Refinitiv.

“In 2019, I have great confidence that our experienced global team and proven strategy will accelerate what comes next for our customers from edge to cloud,” Neri added.

(Reporting by Sayanti Chakraborty in Bengaluru; Editing by Shailesh Kuber)