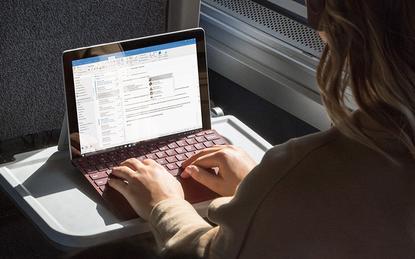 Microsoft has released Windows 10 October 2018 Update, the year's second - and final - feature upgrade but will not begin pushing it onto PCs until next week.

"If you already have a Windows 10 PC and have automatic updates enabled, the update will be delivered to you when it's ready for your machine," cautioned Jennifer Chen, a company communications manager, in a post to a company blog Tuesday.

As Microsoft has done previously, it will restrict the automatic upgrade - downloaded in the background before the user is notified that a reboot is required - to systems believed to be the most likely to successfully install it.

Microsoft determines those candidates by mining the extensive telemetry data harvested by Windows 10 devices and shovelled to Redmond.

Rather than offer the October 2018 Update - Microsoft switched to bland labels in the spring after it exhausted its "Creators" nameplate permutations - to all PCs simultaneously, the company starts with a small number, reaps telemetry or evaluates other feedback, makes changes, say, to fix bugs that stymied some upgrades, then re-releases the update to another swath of systems.

Microsoft has turned to its work in artificial intelligence (AI) and machine learning (ML) to aid in identifying the PCs that will, or won't, handle feature upgrades in an effort to reduce the number that balk or fail, and so streamline the process to reduce IT involvement.

After the April feature upgrade, Microsoft boasted that the applied AI and ML had resulted in a faster refresh cycle. The company reinforced that yesterday.

"Further, our artificial intelligence/ML-targeted rollout approach led to the lowest call and online support requests for any release of Windows 10," John Cable, director of program management, asserted in a Tuesday post to a different blog.

"We will be further enhancing the performance of our machine learning model by incorporating more device signals, such as improved driver telemetry, and weighting of key features such as anti-malware software as we broaden the phased rollout."

Windows 10 users who don't want to wait for the upgrade to come to them, can get it proactively.

Microsoft recommends that corporate IT set a release "ring" to immediately install each feature upgrade on a small number of PCs for initial testing and application validation.

Microsoft designates the opening cycle of each feature upgrade as the "Semi-annual Channel (targeted)" release. The broader release, called "Semi-annual Channel," is announced later, when Microsoft is satisfied that the upgrade has been sufficiently tested (largely by consumers) and is suitable for business deployment.

The time between the two labels has varied, but has been shrinking: Earlier this year, the April 2018 Update was said to be enterprise-ready in just 45 days, a record.

If Microsoft concludes that the PC is not fit for an upgrade - perhaps because of a known problem or a driver that has blocked the install on other systems - it will not install the release.

Other upgrade-now avenues include navigating to this page on Microsoft's website, then clicking the "Update now" button; or by grabbing the Enterprise release from the Volume Licensing Service Centre.