How Mulesoft fits in at Salesforce

After the US$6.5 billion acquisition, how is Mulesoft settling in at Salesforce? 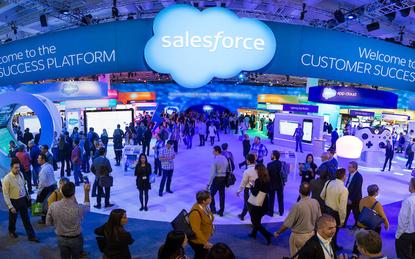 When Salesforce paid US$6.5 billion for integration software specialists Mulesoft back in March a few people raised their eyebrows: what did integration have to do with customer relationship management (CRM) software.

During Salesforce's massive Dreamforce conference in San Francisco, the picture of where Mulesoft fits in has become a little more clear.

In short Mulesoft promises to help businesses link up all of their various IT systems using APIs instead of costly custom point-to-point code, all through its core product the Anypoint platform.

As Reema Peters, chief marketing officer at Mulesoft explained during her Dreamforce keynote: "The average enterprise has 1,100 cloud apps, which doesn't even account for legacy and homegrown systems, so a project traditionally needs an army of developers to hardwire the systems with custom code."

By making these connections, and the data held in these systems more accessible and reusable, Mulesoft promises to speed up development cycles tenfold.

Peters gave the example of McDonalds, which became a Mulesoft customer in 2015 to connect up various backend systems to power its digital in-store kiosks and mobile app.

"An order touches 25 backend systems, so they built what we call an application network to make all of that data reusable, so if UberEats needs to place an order, you can just expose that data to them," she explained.

Speaking to leadership at Mulesoft it is very clear that the company will remain independent under the Salesforce umbrella.

"You need both. We unlock the data but we don't touch the apps. We do a lot of integration with all the cloud providers, and Salesforce has done a really good job up until now of showing what's possible around creating a connected customer experience.

"But what they're finding out is if you don't connect to the backend system and you don't unlock that, then you don't get the leverage and the full benefit of what they're doing with their customer base. So together we're a really good match. I think it's one plus one equals three."

At the time of the acquisition it was made clear that Mulesoft would remain agnostic despite its new ownership.

"A key component of the negotiations was that the value of what we provide is being completely neutral and connecting to everything," Mason said.

Speaking to Computerworld UK during Salesforce's Dreamforce conference in San Francisco this week, Mulesoft CEO Greg Schott built on that: "We don't fit under the umbrella, we are one of the many in parallel… we are tightly integrated in a lot of ways organisationally, but we also are keeping a business unit mentality."

Schott explained that it was a combination of now co-CEOs Marc Benioff and Keith Block, and originally chief product officer Brett Taylor, that sold him on Salesforce being the right route to take at the time.

"After spending time with the three of them I knew that they really understood our business and got what we can do and understood the value of it and that's three quarters of the battle," he said.

Remaining neutral will be key to Mulesoft's continuing growth as a software company, but so will Salesforce and the 'rocket fuel' it can bring to reach more customers, according to Schott.

"They have 20 times as many sales reps as we do, so they are passing a tremendous amount of leads our way," he said.

It didn't take Salesforce long to show the fruits of its biggest ever acquisition, launching an Integration Cloud product underpinned by Mulesoft technology the same month the purchase closed.

The vendor said at the time that the aim is to provide "a set of services and tools that make it easy for customers to surface their data - regardless of where it resides - and deliver intelligent, connected customer experiences across all channels and touchpoints".

Beyond Integration Cloud the parent company has already milked more value from Mulesoft's Anypoint platform, baking it into its latest product: Customer 360.

The product is aimed at helping businesses get a complete view of their customer across various cloud systems, but with Anypoint it can go one step further and allow admins to bring in data from non-Salesforce systems such as point of sale or loyalty data.

"Customer 360 is connected but very separate," Schott told Computerworld UK. "Customer 360 is about a single record of the customer across the Salesforce clouds and Mulesoft is and will remain a business unit that is driving out an application network to connect everything, whether it's Salesforce or not Salesforce… so they are complementary but they're not the same solution."

In terms of the technical work to bring the Anypoint platform into Customer 360 however, it was surprisingly simple.

"We did that very quickly, it was very simple to do with the Lightning components, there was not a heavy lift," Schott said.

The ease with which Mulesoft integrated with Customer 360 certainly started some fresh conversations with other product leads across Salesforce, according to Schott.

That being said, as CEO, Schott wants to make sure his company stays focused on its core product, instead of being pulled in myriad directions by his new colleagues within Salesforce.

"Marc [Benioff] believes that this can be as big as any other large products that Salesforce has, so we want to keep driving that," he said. "We will look at those opportunities to do things within a product, but our roadmap is going to need to stay very focused on driving our core business and I don't see that changing."

In terms of product alignment Mason put it best by referring back to 2012, when a still-independent Mulesoft launched dataloader.io, an integration application that allows Salesforce administrators to import data into Salesforce and export it out again.

"It's just a simple app, but what it does is it puts integration in the hands of every Salesforce admin, who aren't really integration developers," he said. "They've never built an integration flow, but they can do this because it's in the context of the application they understand.

"[Users] should be able to access those resources in a way that's packaged up that makes sense to them. For Salesforce, I could definitely see a lot of overlap between their app exchange and the API marketplace. The app exchange is basically applications that could leverage the APIs. I think there's good synergy between how those two worlds work together."

Consumer goods giant Unilever was certainly the reference customer of choice during this year's Dreamforce, probably because it is a customer of both Salesforce and Mulesoft.

Speaking on stage during both the opening keynote and the Integration Cloud-specific keynote, global CIO at Unilever Jane Moran, who quipped that her title should be chief integration officer, said: "We have 2,000 business applications and there is a lot of legacy and you have to balance that and keep the organisation going while innovating.

"We found those peer-to-peer integrations took a long time to manage, so the whole idea of open APIs and creating something once and re-using it is saving us 40-50 percent on projects now we have the platform in place."

In a video Moran added that Mulesoft "came in with this new concept of smart integration to write one interface we can use over and over again, a library to quickly and smartly connect these business applications globally. Instead of projects taking years its weeks and months. So there is a speed, agility and savings component to what we are doing."

For example, Unilever used the Anypoint platform to link up various systems under its T2 boutique tea brand to get better consistency across its physical and digital stores.

"In the traditional world you would create a project team and write code to deliver that," Dao said. "The overall system becomes more brittle and opaque over time, making a change means finding all code written to connect to that.

"Now Unilever has a catalogue of connectors and APIs stored in Anypoint to replicate the experience they created for T2, including the ability to expose that real time order information up into Service Cloud for customer service agents to give customers better order information.