A new phone-like device from Redmond? Why, Microsoft, why?

Microsoft’s smartphone failures have been spectacularly costly. Could it really be planning to give it another go? 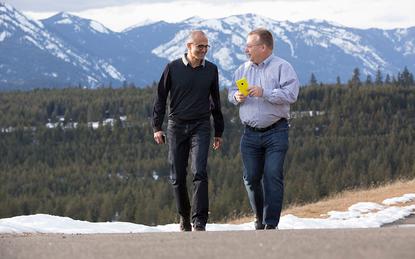 Five years ago, in September 2013, Microsoft made one of the most ill-conceived acquisitions in tech history, purchasing Nokia for $7.9 billion.

Having failed in all its earlier attempts to bolster its failing Windows Phone line, Microsoft decided it would buy its way into mobile success by acquiring what had once been the world’s dominant mobile phone maker.

Key words: “once been.” By the time of the acquisition, Nokia, like Microsoft itself, was being brutalised in the smartphone market by the iPhone and Android. Microsoft ended up writing off the Nokia deal in 2015, laying off thousands of people.

It wasn’t the first time that a lust for smartphone market share had led Microsoft to spend money like a drunken sailor on shore leave — one with countless billions of dollars in his pockets.

For example, the company had spent $400 million on marketing alone in its launch of Windows Phone in 2012. Business Insider estimated that $1,666 was spent in marketing and advertising for every Windows Phone that was subsequently sold — for just $100, before that was slashed to $50.

Post-write-off, Microsoft still tried to make it in mobile, and it continued to fail at it. By the first quarter of 2017, Windows Phone had a mere 0.1 per cent worldwide share of the smartphone market, according to IDC. A mercy killing of the mobile operating system seemed likely.

And in July 2017, Microsoft appeared to finally do just that. Joe Belfiore, the company’s vice president of Windows Experience, announced in a tweet that Microsoft wouldn’t be adding new features or hardware to Windows Phone.

End of story? Perhaps not.

I’ve given you all of that history because it puts this bit of news in perspective: Plenty of reports from reliable sources say the company is hard at work on a new device, code-named Andromeda, that will likely include telephony capabilities. Leaked company documents call it “a new pocketable Surface device form factor.”

It’s not clear yet what constellation of features Andromeda will have. It may fold like a book and have a pen for digital ink input. It may include two screens. It may cost more than $1,000. It will certainly be based on Windows 10. And most everyone agrees it will include the ability to send and receive phone calls and texts.

It’s believed that Microsoft won’t position the new Andromeda device as a smartphone. But no matter how the company markets it, the device will probably have built-in capabilities for doing what a phone does — making and receiving phone calls.

A dead duck, that is. Because Microsoft can’t possibly push its way into the phone market after so many years of failure.

It might come to its senses before it throws many more millions away. It might not finish work on the device. And even if it does, it might not end up selling it. One recent report noted that the code required for Andromeda to work hasn’t been included in the next Windows 10 update, to be released in October.

However, another report says Microsoft is revamping its hardware and software and “sending it back to the labs to be significantly reworked.” But even if all that is true, the device may never see the light of day if Microsoft isn’t happy with the result.

And there’s much that we don’t know. Although the device is said to include telephony capabilities, there’s a chance that those could be based on software such as Skype, rather than on built-in hardware. So its telephone capabilities may not be a core part of the product.

But if Andromeda does have that hardware and Microsoft releases it, expect it to fail. iOS and Android rule the smartphone market, and their power shows no signs of abating.

There’s no sign that Microsoft has finally figured out what people want in a smartphone, or any other “pocketable device form factor.” It should just give up on it and move on.