Technology provider was brought in to solve a network problem for the race, now its turning to machine learning to make use of the data coming off of the bikes 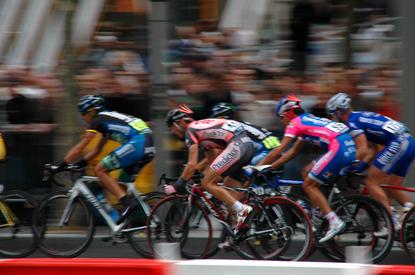 As the 105th Tour de France came to its denouement on the Champs-Elysees following a three-week tour of the country, sister publication Computerworld UK went behind the scenes to see how the organising body is taking data from the bikes and applying machine learning to bring new insights to fans.

In 2015 Dimension Data was brought in by the Amaury Sport Organisation (ASO), the company behind the Tour de France, to solve a problem it had been wrestling with for a few years: how to get real time data off of the bikes.

The South African IT services company - now owned by Japanese firm NTT - was contracted on a five-year deal as a technology partner to the Tour de France to solve this problem.

Dimension Data also sponsors the only professional Africa-based cycling team on the Tour, which features British sprinter Mark Cavendish, but this technology partnership pre-dates that by a year.

The challenge the ASO had faced in the past was not so much collecting this data but transmitting it out quickly in conditions where connectivity can be an issue, such as the arduous 13km climb up Alpe d'Huez.

The ASO decided to use an existing broadcast network, instead of using the unreliable telephony network, to transmit packets of data along with the live streaming video.

Each of the 176 rider's bikes are fitted with bespoke, super-light HiKob devices that collect speed, longitude and latitude GPS signals once every second.

This is then transmitted through this moving mesh-network via sub-gigahertz shortwave radio to either the broadcast motorbikes or a low-flying aircraft, where it is multiplexed with the video transmission and sent to an antenna at the finish line. Here it is picked up by the 'Big Data Truck,' which moves along with the race caravan.

Dimension Data then processes this in the cloud with its own analytics engine to power dashboards and send out live speed and location data for the riders to various broadcasters and digital channels via an API.

This all runs in Amsterdam with disaster recovery in London, but a dedicated tech team sits in the Big Data Truck for the duration of the race.

The vendor is responsible for maintaining this network, various applications and some social media channels, as well as cyber security for the entire environment.

This includes the @LeTourData Twitter feed, which is manned by a data scientist and a journalist to bring daily insights and analysis based on the data throughout the three weeks of the race.

As Tim Wade, senior director of architecture at Dimension Data told Computerworld UK: "One of the challenges we have is that we have quite a distributed set of systems in play that we need to support.

"Of course security is a massive issue, a massive concern as the Tour de France is a popular event, so a high volume target.

"We have put a lot of systems in place to manage and support this as the focus is always to make sure this service is delivered. So we want to be able to manage this in a simple way.

"We have layered on Dimension Data managed services for networking, data centre and Dimension Data's managed security services, as well as having that single pane of glass view under the managed centre."

For a quick idea of the scale involved, the Tour de France brings in more than 12 million viewers per stage and garnered 12.6 million website visits, 71 million online video views, 1.4 million app downloads and 6.5 million engagements on social media in 2017.

Innovating on that data

Now that Dimension Data and the ASO have solved their data connectivity problem, the next natural step is finding new ways to present that data and, frankly, monetise it. Now Dimension Data is turning to machine learning to open up new revenue streams for its client.

As Ruth Rowan, global CMO for Dimension Data, told journalists during the Tour last week: "ASO income comes from sponsors of teams and also selling TV rights to media houses in 190 countries - they need a digital package for those customers and need to innovate there to create new revenue streams for them."

Noelani Wilson, global client programme manager at Dimension Data added: "The belief that underpins the ASO is that fans deserve a revolutionary viewing experience. The tech makes it possible but really it's about what we want to achieve for the fan."

More recently Dimension Data has looked to integrate new data streams into its algorithms to deliver fresh insights to fans.

For example, it has been working on layering third party 3D mapping data on top of the GPS information in real time to give a live view of gradient.

These algorithms have so far been developed to make real-time predictions around breakaway speeds, time gaps, and the firm even claims to be able to predict the winner of a stage with a 70 percent success rate.

Another example of creating potential new revenue streams, like a fantasy cycling game built off the back of this data, have been developed internally at Dimension Data.

This idea, where fans can go head-to-head picking the stage winners against a machine learning algorithm, was actually created by a team of Dimension Data employees. The company ran a competition internally by releasing the 2017 data set and asking for submissions of new ways to use that data for fans.

The winning team - Mark Codendish, another example of never giving engineers the chance to name something - came up with the Man vs Machine prediction game, beating 12 other submissions.

Lastly, Dimension Data doesn't have permission to track and broadcast rider's biometric information at this time, starving them of a rich data set.

Although the teams do this tracking themselves, the information is understandably heavily protected, in terms of technical capability though Dimension Data is bullish that it could do this for the ASO easily.

As Rowan put it: "Cycling is very political and there is lots of debate over who owns and monetises data.

"The ASO only has permission to track the bike at this stage and that's collecting that positioning. We could collect rider data, but don't have permission."

Dimension Data is now into its fourth year of a five-year technology partnership with the ASO and, naturally, says it is keen to continue the relationship.