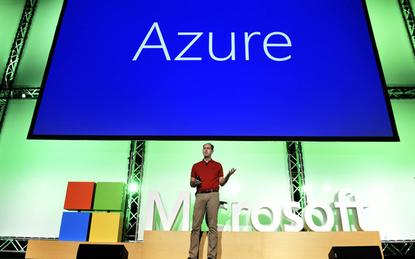 Scott Guthrie - EVP of cloud and enterprise at Microsoft

Microsoft has posted quarterly profit and revenue that beat analysts' estimates, as more businesses signed up for its Azure cloud computing services and Office 365 productivity suite.

The company's flagship Azure cloud product recorded revenue growth of 89 per cent in the fourth quarter ended 30 June - its shares were up slightly in after-hours trading.

Much of Microsoft's recent growth has been fuelled by its cloud computing business, which has benefited from companies rushing to shift their workloads to the cloud to cut data storage and software costs.

"The combination of the cloud, which is a mega-trend that's going to last for years to come, and the execution, this is company that knows how to sell and be innovative - it's hard to argue with anything here," said Tom Taulli, InvestorPlace.com analyst.

Microsoft shares have risen 180 per cent since Satya Nadella took over as CEO in 2014, refocusing the company on cloud computing rather than PC software. Its market cap edged above $800 billion for the first time earlier this month.

Azure has a 16 per cent share of the global cloud infrastructure market, making it the second-biggest provider of cloud services after Amazon Web Services, according to April estimates by research firm Canalys.

Revenue at Microsoft's productivity and business processes unit, which includes Office 365, rose 13.1 per cent to US$9.67 billion, topping analysts' average expectation of US$9.65 billion, according to Reuters.

"This was another gem of a quarter from Microsoft as Nadella's cloud vision is coming to fruit on the heels of massive Azure growth and secular tailwinds," said Daniel Ives at research firm GBH Insights.

Revenue for the company's LinkedIn business and job network grew 37 per cent from the year-ago quarter, while its Dynamics 365 online business application suite posted a 61 per cent increase.

The combination of those two services highlights Microsoft's rise as an alternative to Salesforce.com, which dominates the customer relationship management market, said Johnny Won, founder of Hyperstop, a tech consultancy firm.

"It seems like this is actually a formidable threat to Salesforce," Won said.

Overall, the Redmond, Washington-based software maker's revenue rose 17.5 per cent to US$30.09 billion, above expectations of US$29.21 billion.

Excluding certain items, Microsoft earned US$1.13 per share, while analysts had expected US$1.08.

(Reporting by Vibhuti Sharma in Bengaluru and Salvador Rodriguez in San Francisco; Editing by Anil D'Silva and Richard Chang)