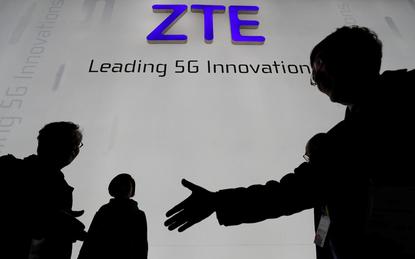 U.S. president Donald Trump has floated a plan to fine ZTE US$1.3 billion and shake up its management, as U.S. lawmakers vowed to keep sanctions that crippled the Chinese telecommunications firm.

Trump, speaking to reporters at the White House about ongoing trade negotiations with China, said there was no deal with Beijing on ZTE.

In addition to the fine, Trump said ZTE should come under new management and name a new board of directors.

Republicans and Democrats in Congress, however, accused the president of bending to pressure from Beijing to ease up on a company that has admitted to violating sanctions on Iran. Their reaction could complicate U.S. efforts to win trade concessions from China to narrow a US$335 billion annual trade gap.

"The proposed solution is like a wet noodle," said Senate Democratic leader Chuck Schumer, who accused Trump of jeopardising national security for what he described as minor trade concessions.

Schumer, speaking before Trump detailed his latest thinking on ZTE, added that the possible remedies floated earlier by the Trump administration were inadequate.

According to sources familiar with the discussions, a proposed trade deal with China would lift a seven-year ban that prevents U.S. chipmakers and other companies from selling components to ZTE, which makes smartphones and telecommunications networking gear.

In return, China would eliminate tariffs on U.S. agriculture or agree to buy more farm products from the United States.

The U.S. Commerce Department imposed the ban in April after it determined that ZTE had broken an agreement after it pleaded guilty to shipping U.S. goods and technology to Iran.

The ban has threatened the viability of China's second-largest telecoms maker by cutting off access to companies that supply 25 per cent to 30 per cent of its components.

Suppliers include some of the biggest U.S. tech companies, including Alphabet’s Google, which licenses its Android operating system to ZTE, and chipmaker Qualcomm.

ZTE last week said it had suspended its main operations.

U.S. Treasury Secretary Steven Mnuchin told lawmakers that the treatment of ZTE was not "a quid pro quo or anything else" related to trade, and said national security concerns would be taken into consideration.

"I can assure you that whatever changes or decisions that are made in Commerce will deal with the national security issues," Mnuchin told a U.S. Senate appropriations subcommittee.

Republican and Democratic lawmakers said they were looking at ways to block any possible changes. "We will begin working on veto-proof congressional action," Republican Senator Marco Rubio said on Twitter.

The Senate Banking Committee voted 23-2 on Tuesday to adopt a measure that would make it harder for the president to modify penalties on Chinese telecommunications firms. It was added to legislation that would tighten oversight of foreign direct investment.

The Republican-controlled House of Representatives is weighing several possible changes to a defence-policy bill that would also keep up the pressure on ZTE. One proposal would block the sale of ZTE products and those of another Chinese company, Huawei Technologies, until national security officials certify they are safe.

Another proposal would require the director of national intelligence to consider the security implications of any changes to the ZTE ban, while a third would require reports on quid pro quo offers between the U.S. and Chinese governments over any possible plan.