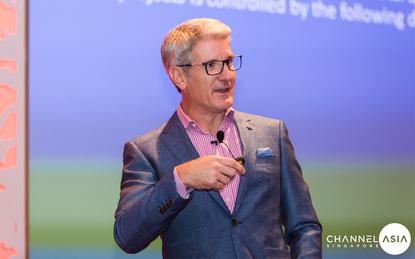 The early 1990s, a time when the PC era was in full swing and new computer resellers were popping up seemingly every day as businesses and consumers couldn’t get enough of the personal computing revolution.

It was also, arguably I grant you, a great period for music with the likes of Nirvana, Chili Peppers and Oasis topping the charts (the less said about “MMMbop” and Vanilla Ice the better).

One song that perhaps you missed from 1990, despite it making no.1 on the Billboard Hot 100 that year, was the frankly forgettable “She Ain’t Worth it” by Glenn Medeiros and Bobby Brown.

Why all the nostalgia for the early 1990s and a long forgotten song by a Hawaiian crooner and an up and coming rap artist?

Well, that particular song is credited as being the first to debut the word “featuring” on a no.1 hit starting an explosion of musical collaborations over the following 25 years.

It’s hard to listen to anything from the current charts that doesn’t credit more than one person and this song has come to be seen as a watershed in changing attitudes between artists on collaboration.

Outside of academia where the sharing of ideas and collaboration is the modus operandi few other industries have really embraced collaboration.

The IT industry in particular has built a very public reputation over the last couple of decades for its un-collaborative spirit between vendors and partners much to the frustration of customers who grew increasingly tired of the constant finger pointing in multi-technology solutions.

Anyone remember trying to run Oracle on Windows NT in the early days or the IBM-Apple alliance, no not the latest one-that might actually work, you have to go back to the Taligent Operating System meant to rival Windows or the AIM alliance to create chips to compete with Intel for real examples of failed collaboration.

In part this was driven by a general attitude at the time that all competition was bad and that it was better to lose than to work with rivals.

Anyone who attended a large vendor conference in the 1990s will have seen the level of fury aimed at any and all competitors and this also bled over into competition between the big systems integrators based around who “owned” the customer.

Fast forward to 2018 and there has been a noticeable shift in attitudes and behaviour.  This may be in part due to the rapid emergence of a new breed of cloud vendors and partners. A large number of these businesses are run by younger Gen Y staff who seem naturally more open to collaboration and of course aren’t tainted by history.

Plus, these businesses typically have a very specific solution focus so there is no concept of being a “one-stop-shop” leading ultimately to a strong need and desire to collaborate with others.

Combine this with growing demand from customers for rapid adoption of “bite-sized” solutions for specific business needs and you have a landscape that is shifting under our collective feet.

Integration is the new byword for IT and in a world where services are increasingly fungible, anyone not seen to be playing nicely with others is much easier to replace than before.

For some the change will be easier to digest than others. Ask yourself this, how many strategic partnerships do you have (exclude your large vendors)? How many of these are with start-ups? What percentage of your deals involve another party, either introduced by you or by the client?

If you’ve ever walked the floor at an AWS conference, I’d be amazed if you recognised more than a third of the company names that flash past on lanyards.

Any talk of customer ownership in the modern era is nonsense and it is time to move beyond the flawed ”co-opetition” model we have been operating on for the last few years and into an arena of true collaboration.

Ultimately, it’s what customers are looking for and they have a nasty habit of being right most of the time.

If you’re looking at ways to broker new partnerships that could benefit you and your customers check out some of the new meet-up groups that have been established to move outside of your normal circle of vendor conference buddies.

It’s worth considering that a lot of these new businesses don’t engage with the industry in the same way so you won’t find them at the big vendor conferences and IT exhibitions.

I encourage you to seek out software and developer forums in your local market to find potential partners. There are some really outstanding ISVs in the market today and as we know the future is all about applications. There’s a whole new world of potential collaborators out there.

And finally, whatever you do, resist the temptation to watch the video for “She Ain’t Worth it”, don’t say I didn’t warn you.