At least eight brokerages lifted their price targets on the stock 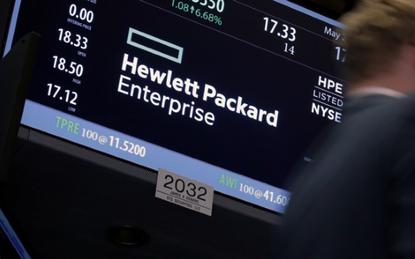 Shares of Hewlett Packard Enterprise rose seven per cent to a record in early trading on Friday after the company unveiled a US$7 billion share buyback program, reported strong quarterly results and raised its full-year profit forecast.

At least eight brokerages lifted their price targets on the stock.

The results were the first under new CEO Antonio Neri, who took over from Meg Whitman in February.

HPE has been cutting costs and investing in research to bolster its mainstay server business amid competition from cheaper, non-branded assembled servers even as IT spending shows signs of improvement.

"We see a clear pattern of improving IT spend after years of under-investment and a pause in spend around cloud decisions," Morgan Stanley analyst Katy Huberty said.

The company joined NetApp, Cisco and IBM in beating revenue estimates in the latest quarter.

Neri, a computer engineer who has spent more than two decades with the company, was expected to lead a restructuring announced by Whitman in October.

The new CEO now plans to win investor confidence by increasing dividend by 50 per cent starting third quarter and completing the mega share repurchase by fiscal 2019.

Since Whitman split Hewlett Packard into HPE and PC-and-printer business HP in 2015, HPE shares have gained nearly 50 per cent. HP shares had doubled in the same time.

HPE forecast an adjusted profit of 29 cents to 33 cents per share for the second quarter, beating the average estimate of 26 cents, according to Thomson Reuters.

“While HPE was careful not to set too high of a growth bar for the remainder of the year, we see this as a multi-quarter and potentially multi-year trend that puts upward pressure on estimates," Huberty said.

HPE is also likely to benefit from the recently disclosed security flaws Spectre and Meltdown that affected nearly every modern computing device.

The vulnerabilities are likely to drive demand from customers who have older servers where performance has been hit by the installation of software patches, Hosseini said.

(Reporting by Supantha Mukherjee in Bengaluru)